When someone makes a truth claim or statement, no matter who it came from, this claim must come under the Three Fundamental Laws of Logic. If the claim is true, then the source of the claim is irrelevant and arbitrary. The genetic fallacy ultimately reduces the significance of a claim because of its origins.

For an extreme instance, Adolf Hitler said that smoking cigarettes are unhealthy, and tried to convince those around him to stop smoking. We think of Adolf Hitler as being an evil person and with anything he might have said, we perhaps want to dismiss it as something that is false, or we do not want to give what was said the time of day, so to speak. The problem is, sometimes the truth hurts, not always the claim itself, but where the claim or statement came from. 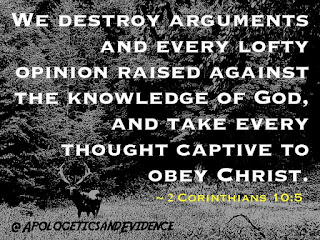 If a person does not like the source, no matter if he is usually described as an expletive, or if it is your mother-in-law, or a biker, or a janitor, or the Bible, it has nothing to do with the validity of the truth claim. The thing about this is that we need to remember to try to not be emotionally driven when we have conversations.

The genetic fallacy is often the first fallacy committed in a conversation. If we let our emotions be our fuel for making our decisions, we will only run into problems (and worse, perhaps believe things that are false). Pay close attention to the claims and statements that are made; pay little attention to the source. When a claim is made, follow the truth where it leads.

Popular posts from this blog

By Nace Howell
“Loretta” replied to my response to her first letter (the reason I put her name in quotes is because I don’t believe it is her real name, since some of my friends have received similar letters from the same P.O. Box address under a different female name. But even if it is, her identity is clearly protected). As discussed in the first entry concerning this, I received a letter from a Jehovah’s Witness ( JW ) in the mail and a tract from the Watchtower Bible and Tract Society ( WBTS ), which is the organization of the JW’s. Please look at the first article concerning this conversation , because it is important to know what I replied, and how she responded (below). Notice that none of my questions to her were acceptably answered . Before we get to the letter, it should be noted that I have included the grammatical errors (in this hand-written letter) because I think that it gives strength to the statistics revealing the education levels of JW’s. They are told to not attend higher edu
Post a Comment
Read more

Contrary to Popular Opinion: Buddhism is a Religion

By Nace Howell
I have been to several predominant Buddhist countries, I live in a place with Buddhism being a predominant worldview (with a large Dharma center being less than a 40 minute drive from my home), and so this compels me to help people to see Buddhism for what it is. Many people like to say that Buddhism is not a religion , because of the negative connotations that the word “ religion ” has with it today for several ridiculous and poor reasons, but also because many emphasize the philosophical nature of Buddhism so much that it blinds some from seeing it for what it really is, and not seeing how it falls short of offering hope to the world.      Consider with me, if you will, the Four Noble Truths of Buddhism. The first is the idea that suffering exists . The second is that we suffer because we are attached to people, places, animals, and things (basically, nouns). The third noble truth is that if we release the attachment to people, places, animals, and things , then we will be fre
Post a Comment
Read more

All Religions by Their own Existence Claim Exclusivity

By Nace Howell
All religions can be false, but not all of them can be true . One religion can be true , which is what I argue for Christianity , but not all of them can be true because they oppose one another. Religions by their own existence imply exclusivity. Think about it… Would a religion exist if it thought another religion were the truth? Think of what is likely the most extreme example: Hinduism. Hinduism teaches that “there are almost no restrictions on personal beliefs, but in order to qualify as a Hindu, a religion has to (1) regard the Vedas as divinely inspired and authoritative, (2) accept the caste system, and (3) respect the veneration of the various levels of deities and spirits, including the protection of cows.” [1] Notice the wording in this citation: not that a person must do these things to qualify, but a religion must do these three things to qualify as Hinduism. The reason Hinduism is such an extreme example is because it is a polytheistic religion, having up to 330 mi
Post a Comment
Read more

Joseph Smith had the same Demon that influenced Muhammad

By Nace Howell
What does Islam have in common with Mormonism? Seriously, the similarities are uncanny. Like human beings, demons are creatures of habit . The Bible does not tell us much about them, but from what it does tell us, we can learn a lot. Jesus reveals to us some things about their behavior: When the unclean spirit has gone out of a person, it passes through waterless places seeking rest, but finds none. Then it says, ‘I will return to my house from which I came.’ And when it comes, it finds the house empty, swept, and put in order. Then it goes and brings with it seven other spirits more evil than itself, and they enter and dwell there, and the last state of that person is worse than the first… [1]   Jesus clearly knows that demons have typical behaviors. He has seen it many times before. He lets us know that a typical behavior for a demon is that home is where the heart is . When your house crumbles to the ground, you move to a new one. Likewise, when a person dies, the demon is f
Post a Comment
Read more

Response letter to a Jehovah's Witness

By Nace Howell
Some states make it easy to find the names and addresses for private land owners. Montana is one of them. Since the COVID shutdown started, I have personally received a letter in the mail from a Jehovah’s Witness (JW) about 6 times, and so have several people I know. The reason they started doing this is because they do not want to go door to door because of COVID issues. It is interesting to note that the people who send these letter out never provide their own personal mailing address, and never their last name. This makes it impossible to know exactly who they are. It is a sneaky, (and in our favor) counterproductive, and dishonest way to behave. It definitely seems to tell something about the character of the JW’s who choose to take this route (that they are cowards and their information is not worth the risk of their identity). The letters always include a tract from the Watchtower with them and a “friendly” letter from the person with no personal address or last name provided
Post a Comment
Read more

An Addition to the Revelation from the Mormon Doctrine and Covenants

By Nace Howell
In Doctrine and Covenants (D&C), The LDS (Mormon) church says about the D&C that,   Though there may be those who consider the Doctrine and Covenants prophecies pertaining to this last day (D&C 45:42; D&C 64:24) before Christ’s coming to the world as mere hyperbole, such is not the case. There is an undeniable literalness to the Doctrine and Covenants. Hence, the admonition to “search these commandments, for they are true and faithful, and the prophecies and promises which are in them shall all be fulfilled. [1]   So then, we are to take the D&C undeniably literally , according to the above citation. This is not only devastating to the Mormon faith, but also to Joseph Smith himself. In D&C section 45, we find several things that not only take away from the Revelation of Jesus, but that also add to the Revelation of Jesus in the Bible. For instance, in verses 64-66 in D&C, it says,   Wherefore I, the Lord, have said, gather ye out from the east
Post a Comment
Read more

10 Things that made Jesus Stand Out in the Ancient World

By Nace Howell
Consider for a moment with me, the things about Jesus that were so attractive to people in the ancient times. Imagine that you were one of these people. How would you react to seeing such things with your own eyes, and experiencing these things with your own life? What would it do to you? What would you think about Jesus after seeing and experiencing these things? Ever wonder why was Jesus so popular in the ancient world, and why has He been the most studied person in human history? Perhaps the answers are found below. Here are ten things that made Jesus stand out in the ancient world.     1. He told the disciples where to fish . In Luke chapter 5, I believe we find something astonishing:   “One day as Jesus was standing by the Lake of Gennesaret, the people were crowding around him and listening to the word of God. He saw at the water’s edge two boats, left there by the fishermen, who were washing their nets. He got into one of the boats, the one belonging to Simon, and aske
Post a Comment
Read more

By Nace Howell
Joseph Smith was very familiar with the Bible. I would even go further to say that when he was dictating or translating the Book of Mormon (BoM) to his friend Martin Harris that he was frequently reading out of the Bible on account of literary or research fatigue . Untrained people will sometimes make long citations in their writing because they do not want to put the extra work into thinking for themselves. Interestingly enough, the Book of Mormon asks you to compare certain chapters to books in the Bible when the BoM plagiarizes the Bible. Many long passages of Isaiah can be seen in the BoM, but that is not all. There are several passages in the BoM that are clearly taken from the Bible . Not only this, but Joseph Smith even started his own translation of the Bible, which is literally a translation disaster. Take for instance John 1:1 in the Joseph Smith Translation (JST) which was translated from the King James Version (KJV) of the Bible : “In the beginning was the gospel preache
Post a Comment
Read more

Nace Howell
After earning a Bachelors of Science in Bible, I then earned an M.Div. in Apologetics. I have taught Theology and Apologetics for well over a decade, and I am currently working on a doctorate in Apologetics. I am also experienced in felling trees, operating heavy equipment and herding cattle. I have an amazing wife (gross understatement) whom I am crazy about! I love guns and 4-wheeler riding, and motorcycling, and machines in general. I am a senior pastor in an Indian Reservation in the Rocky Mountains.