What is Eating at You?

Abortion is quite strange. One of the main arguments I hear for it is that it is good because the mother is unable to afford or to take care of the baby. But everyone knows about adoption. So what now? Another argument I hear is that women will have abortions if Roe v Wade is reversed in back alleys and such, so we shouldn’t reverse it. But when is it ok to murder a baby? Is it ok to murder a baby when women will be getting infections because they have unsterile environments for abortion? Seriously? Please tell me a better reason, a more convincing reason when killing babies is ok. 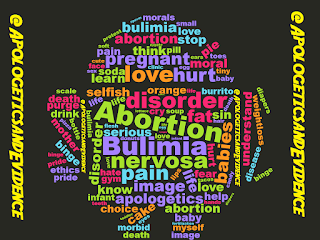 
"Therefore do not let sin reign in your mortal body so that you obey its evil desires. Do not offer any part of yourself to sin as an instrument of wickedness, but rather offer yourselves to God as those who have been brought from death to life; and offer every part of yourself to him as an instrument of righteousness. For sin shall no longer be your master, because you are not under the law, but under grace" —Romans 6:12-14

Written by Nace Howell through the grace of the Lord Jesus
Posted by FrankApologist at 8:52 AM