Straight from the Horses Mouth

The title of this article means — from the original or most reliable source.

“Why would I want to read a book that is 2000 years old?” I was asked this question by a high schooler in a discussion about a book by Anton LaVey. That book was the Satanic Bible. He said that he thought it made more sense than a book that was written over 2000 years ago or more. The idea here is that a book written over two thousand years ago would not be trustworthy because it is so old. Not only would this be an issue of absolute truths (whether they exist or not), but also that more modern writings are supposedly more trustworthy. If absolute truths do not exist, then we can literally know nothing. If they do exist, then time would have no effect on such things.

This is saying that Jesus is a created being, much like what Jehovah’sWitnesses teach. The problem with this is that the first several verses in the Gospel of John teach something else:

This causes us to rationalize that if Jesus was there before the beginning, and everything was made through Him, and there was nothing made at all unless it was made through Him, then He must not be a created being, but He must be the creator of the universe, according to the Bible. This is in direct contradiction with the Quran.
Speaking of contradictions and absolute truths, both of these citations above cannot be correct. Either Jesus was created or He was not created. Why would we have any reason to believe that Jesus was not created? I think His miracles attest to who He claimed to be: “I and the Father are one” (John 10:30). People wanted to kill Him for blasphemy because He said this. Now why would we think this phrase means anything differently today? There is no reason to think that Jesus meant something else, because of the reaction of those who opposed Him. Jehovah’s Witnesses often make the claim that He never meant to be worshiped, but seriously, it seems inevitable if He was who He says He was. In any event, we have very strong evidences to believe that John’s testimony about Him is in fact true, absolutely.

Another example that I think shines like a sore thumb in the Quran is Sura 4:157-158:

And their saying: Surely we have killed the Messiah, Isa [Jesus] son of Marium [Mary], the messenger of Allah; and they did not kill him nor did they crucify him, but it appeared to them so (like Isa) and most surely those who differ therein are only in a doubt about it; they have no knowledge respecting it, but only follow a conjecture, and they killed him not for sure. Nay! Allah took him up to Himself; and Allah is Mighty, Wise.

Again, this is much the opposite of what the Quran teaches. Either Jesus was killed, or He wasn’t. Don’t you think the people who saw Him bleed out (see John 19:34) and those who wrapped His dead body full of spices and buried Him (see John 19:38-42) would know if He were dead or not? It seems ridiculous to even question such a thing.
So Islam came 600 years after Jesus. Shouldn’t we trust documents written closest to the source? Closest to the original?

Similarly, Mormonism was founded long after Jesus’ time on earth, but still has much to say about Him. Mormonism came 1900 years after Christ, and the sacred scripture to Mormonism is the Book of Mormon. Why should we trust what it said about Christ? The answer is that we shouldn’t. For one, it also directly contradicts things written about Jesus that are found in the Bible, and secondly, it was written nearly two millennia after Jesus time on earth.
The message that the Book of Mormon teaches can be summed up in 2 Nephi 25:23:

For we know that it is by grace that we are saved, after all you can do.

This is very different from what the Bible teaches. Consider the partial plagiarism that Joseph Smith is guilty of from Ephesians 2:8-9:

For we know that it is by grace we are saved, through faith, and this, not of ourselves. It is the gift of God, not by works, so that no one may boast.

The two different messages clearly displayed here are that either our works help save us, or they do not. Again, this is like saying that a woman is both pregnant and not pregnant at the same time. Both cannot be true. Should we go by what some random dude in the 19th Century says about the message Jesus gave us, or should we reach as close to the source as possible?
Joseph Smith, the author of the Book of Mormon, also says this about the book he authored with frequent plagiarized citations:

I told the brethren that the Book of Mormon was the most correct of any book on earth, and the keystone of our religion, and a man would get nearer to God by abiding by its precepts, than by any other book (History of the Church, 4:461). 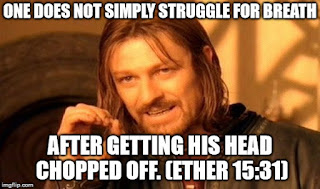 The most correct book of any on earth! Wow! Not having read all of the books that were ever printed on Planet Earth since the invention of books, myself, that seems like an enormous claim. It would be like me saying that this article is the most correct article on earth. I’m certain there will be a few raised eyebrows at this point, for good reason. It is simply a ridiculous claim. If the Book of Mormon is superiorly correct, why is it so filled with logical fallacies, plagiarism, and opposition to the Bible? Joseph Smith claims that God translated the Book of Mormon for him through a stone that he gazed at while it was in his hat. Why would the plates that he found be necessary at all if he didn’t even use them to translate the Book of Mormon, and why was the book translated into a language that was no longer spoken at the time of the translation?

Shouldn’t we want to know what happened closest to the source? Would we trust documents that were written about the events of 9/11 2000 years after it happened or would the nearest testimonies surrounding the event be more accurate?
The closer we are to the source allows less time for embellishment. The closer materials we have to the actual event is going to be closer to what actually happened. This is why the Christian community gets so excited when an even older manuscript is discovered in the archives of the world’s greatest museums. They never disagree with the doctrines of Christianity!
Police know this tactic of sources all too well. This is why they separate their witnesses when interviewing at the scene of the crime. If the witness can talk with each other before they are interviewed, then they can change their story. Partial differences are naturally occurring, but there is never a question as to what really happened. Much like the gospels. They have very minor discrepancies, but they all make absolute claims that Jesus died and rose again. They do not budge on the doctrines.
Anton LaVey died the year I graduated high school. Class of ’97. He died in my lifetime. When someone reads this a thousand years from now, they will look at this and trust this source because I, the author was alive at the time of the event. Whatever legend or misinformation someone makes about the author or his book in the future, depending on the subject matter, the source could shut it down. That which is closest to the source is more trustworthy than that which is further away from the source. Just go straight to the horse’s mouth. There is a reason this idiom is so popular.

Posted by FrankApologist at 2:03 PM No comments: