Buddhism is interesting in that it teaches about the suffering that most people seem to experience. With that being said, allow me to discuss the basic tenets of Buddhism.
The Four "Noble Truths" are that to live is to suffer (dukkha). That is the first Noble Truth in Buddhism. The second is that suffering is caused by attachment. The third noble truth is that eliminating attachment will eliminate suffering. The forth noble truth tells us how to do that, which is by following the Noble Eight-fold Path. In simple elaboration, 1. Suffering exists. 2. We suffer because we are attached to things like our cars and wives and jobs, and it hurts when they break or die. 3. We cease suffering by releasing our attachment to things, whether they are our wives, cars, or jobs, etc. 4. We release attachment by following the Noble Eight-fold Path.
One major problem with this is that in order for this all to work, one must be attached to Buddhism. So then, right off the bat, Buddhism fails. You have to be attached to Buddhism, yet Buddhism teaches that you should not be attached to anything, because this is why you suffer. There must be a different way, then, to deal with suffering.
In any event, what Buddha meant by suffering is that life is all about wanting something and basically not getting it, or keeping it. We as human beings are attached to things (or people), and because these things often don’t do what we want them to do (like be ours or stay alive, for instance), we are in a period of suffering.
I would like to first ask the question, why do we feel entitled to these things in the first place? To have an attachment, we must first feel entitled to them. 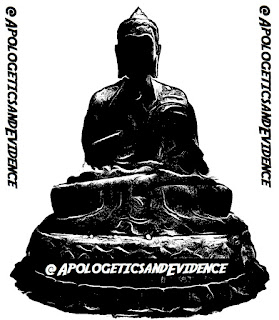 We compare our own lives with other people, and our coveting hearts are revealed to us. The reason we suffer from being attached is because we are idolizing. This is the real problem with Buddhism. It only goes so far. It teaches that we stop at being attached, but the real issue is that we are putting things in the place in our lives which only God deserves. Is He Lord of your life? Or is there some kind of replacement that you have? The Bible teaches us that we get our joy from Him and Him alone. Anything else is generic and not genuine. Think of sodas. If we buy Dr. Thunder or Mountain lightning or “Cola,” as much as we lie to ourselves that it tastes like the real thing, we still know that a real Coke is more satisfying. Same with chocolate. Dove, Hershey’s, German or M&M’s, anything else just doesn’t taste as good. It is because these things are designed to be replicas. They are designed to take the place of the real thing. They are not meant to be their own thing. This is what idolatry is like. When we allow these things in our lives to take over our lives, we are placing them in a status that only God deserves to have.
It is really simple: stop doing this. Get on your knees and make Jesus the Lord of your life, because there is no replica. Jesus says, “I am the Way the Truth and the Life. No one comes to the father but through me” (John 14:6). In other words, there is no room for another replica. Why settle for something that is second best when you can have the best? Statues of Buddha will never do anything for you. Just look at the supreme lack of reasoning Isaiah gives for idolatry. He explains that with one half of the wood, a man builds a fire, and with the other half, he makes an idol and worships it:

All who make idols are nothing,
and the things they treasure are worthless.
Those who would speak up for them are blind;
they are ignorant, to their own shame.
10 Who shapes a god and casts an idol,
which can profit nothing?
11 People who do that will be put to shame;
such craftsmen are only human beings.
Let them all come together and take their stand;
they will be brought down to terror and shame.
12 The blacksmith takes a tool
and works with it in the coals;
he shapes an idol with hammers,
he forges it with the might of his arm.
He gets hungry and loses his strength;
he drinks no water and grows faint.
13 The carpenter measures with a line
and makes an outline with a marker;
he roughs it out with chisels
and marks it with compasses.
He shapes it in human form,
human form in all its glory,
that it may dwell in a shrine.
14 He cut down cedars,
or perhaps took a cypress or oak.
He let it grow among the trees of the forest,
or planted a pine, and the rain made it grow.
15 It is used as fuel for burning;
some of it he takes and warms himself,
he kindles a fire and bakes bread.
But he also fashions a god and worships it;
he makes an idol and bows down to it.
16 Half of the wood he burns in the fire;
over it he prepares his meal,
he roasts his meat and eats his fill.
He also warms himself and says,
“Ah! I am warm; I see the fire.”
17 From the rest he makes a god, his idol;
he bows down to it and worships.
He prays to it and says,
“Save me! You are my god!”
18 They know nothing, they understand nothing;
their eyes are plastered over so they cannot see,
and their minds closed so they cannot understand.
19 No one stops to think,
no one has the knowledge or understanding to say,
“Half of it I used for fuel;
I even baked bread over its coals,
I roasted meat and I ate.
Shall I make a detestable thing from what is left?
Shall I bow down to a block of wood?”
20 Such a person feeds on ashes; a deluded heart misleads him;
he cannot save himself, or say,
“Is not this thing in my right hand a lie?” –Isaiah 44:9-20

Besides, all of these other replicas (gods) will do nothing but cause us suffering. They do not bring value, meaning or purpose to our lives. This is not the case with our Creator. You are loved, valued, and your life has eternal purpose because of Him. He sent His one and only Son to die in your place and on your behalf, so that you might have eternal life. Why? Because there is nothing that we can do to earn our own salvation. Not even partially. We had no way of making our moral failures disappear. We cannot erase them and they never just go away. A moral failure is what the Bible calls a sin. Sin is what separates us from God. The Bible says that all fall short of God’s glory (Romans 3:23). Just like if we robbed a bank and got caught, we would go before the judge and be faced with sentencing because justice must be served. The judge is not going to let us off the hook just because we promise never to do it again, but the crime requires punishment. The same goes for God. He is a just God and there are no other Gods before Him. If we worship these other things which we make our gods, He will sentence us to judgment because justice must be served. But this is not the end. Romans 6:23 tells us that the wages of sin is death, in other words, as we have lightly discussed, that the cost for our moral failures is death. This is the Bible’s explanation of why human beings die. Because of sin. But as I was getting at, this is not the end. Romans 6:23 continues, “But the gift of God is eternal life through Christ Jesus our Lord.” We have eternal life through Jesus Christ! Jesus took our place in God’s wrath. In other words, Jesus paid the penalty, the fine for which our sin deserves. Romans 5:8 says, “God demonstrates His own love for us in this: That while we were still sinners, Christ died for us.” In the act of our moral failure, Christ died for us. How can we not give Him thanks and praise and worship Him forever? We are not bound by God’s wrath. The fine has been paid through Jesus if we simply place our trust in Him and make Him Lord of our life. Romans 10:9 says that “If we confess with our mouth that Jesus is Lord and believe in our heart that God raised Him from the dead, then you will be saved.” Make Him the Lord of your life today. Don’t settle for a replica.

Written by Nace Howell through the grace of the Lord Jesus.

Posted by FrankApologist at 10:51 AM